Our Celebrate bloggers are a team of accomplished writers, consultants, facilitators and Celebrate practitioners who write about life through the lens of celebration. From small and simple everyday moments to profoundly deep experiences, our bloggers will take you on a journey of celebration.

Get our blog entries delivered directly to your email!

You will proceed to Google's FeedBurner service which handles our blog subscriptions. 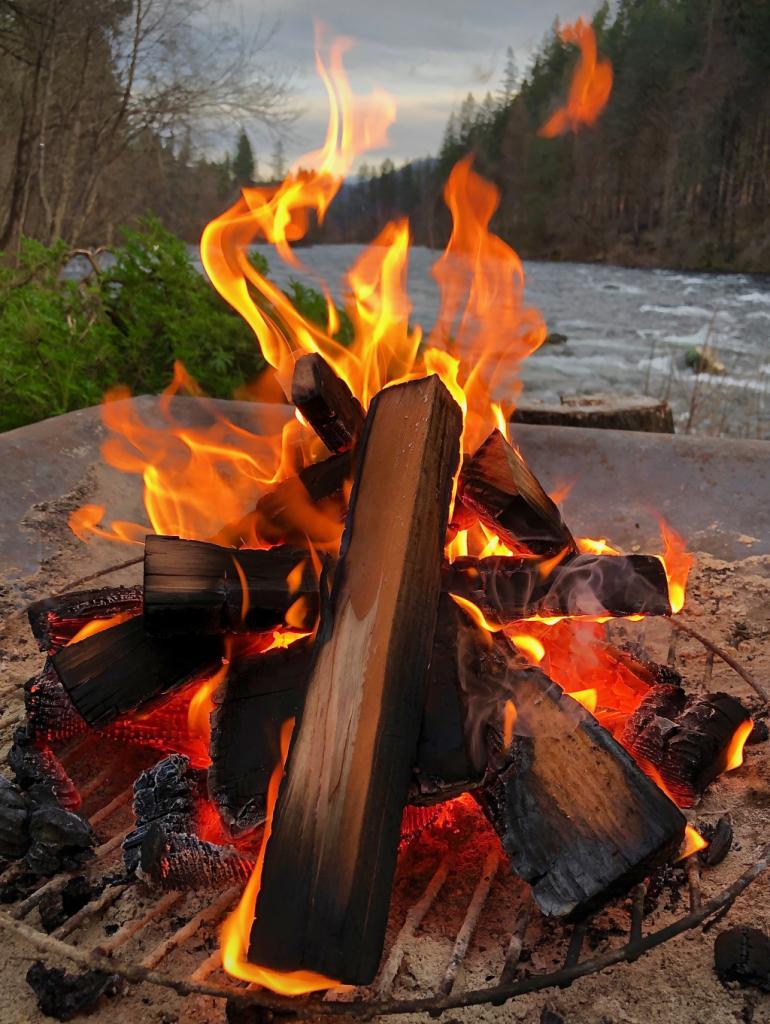 Two summers ago, I stood with a friend by the McKenzie River, canning tomatoes and making applesauce, watching the graceful water. We were oblivious to the coming conflagration. Only one week later, fire would destroy his house among hundreds, along with the sheltering forests.

Returning this year on a chilly spring day, it felt strange to intentionally build a fire where houses and forests burned. Even stranger, our new fire’s wood came from the heart of trees that died in that calamitous wildfire.

Yet there was also something heartening about our new fire. Not one tree on my friend’s property survived the wildfire, and little was left of his house but a half-melted metal ladder and a few other scraps. But when the dead, burned trees were removed, their wood at the core was still solid, beautiful, partially viable for milling into timber for constructing a new house to replace the charred one. My friend who “owns” the place—as if ownership of nature exists—made sure to reclaim every possible bit of wood, as part of his healing process and the land’s. Repurposed wood is informing his rebuild. Scraps of it became firewood that kept us warm, alongside the cold river next to the new house frame, as yet unable to shelter us.

Fire hot enough to scour its landscape is an awesome force. Our careful little fire—a small but close relative of the conflagration—was a flickering reminder that fire is neither wholly bad nor wholly good, just like the rest of us. Fire has its place in the landscape, and so do we. But fire and people can do damage when raging out of control. We can be too much, too many, too fierce, or in the wrong place. Flames are a living mirror.

In that mirror, I see the universal necessity of rebuilding. Creation and destruction are two aspects of the same cycle, both constantly in process. The longer we live, the more loss we’ll survive. If not the loss of home, then the loss of loved ones, time, plans, health. In firestorms of injustice, oppression or war, we may lose peace, freedom, limbs, or life. We’ll inevitably lose youth, then also old age, as our personal earthly era disappears.

Forget the cliché: time does not heal all wounds. Things lost to fire will never be unburned. Tragedy will never unhappen. Our deepest wounds integrate rather than heal. Rebuilding is resilience. Resilience is the prevention of wounds for others when we can’t heal our own.

I celebrate resilience, for it’s an essential aspect of survival, instinctive in us all. Our vast capacity for resilience provides us strength for continuance, in face of terrible events. I celebrate the ones who soon simply get back to work, rather than rage at the cruelty of loss. It’s tough to attain such grace; to lose the heavy dead weight of complaint.

Nature excels at this. Since the fire, new green undergrowth has silently appeared along the river. The plants don’t blame or litigate. They just newly grow. The forest will never return as it was, because the missing forest canopy has raised the surface temperature, when climate change was already stressing the trees with undue heat. It’s harsh. But something new and next is growing already. Life will continue its fierce resilience in every new moment.

My neighbors and I can’t afford the wasted effort of complaint either. It’s July now, another fire season looms, and our homes are not as hardened against flames as they could be. The spring rains fed abundant regrowth but also created a new fuel load that increases fire danger. Creation and destruction, growth and death, go on within and around us everywhere. To celebrate life is to honor its beautiful, dangerous weave. We must honor it by clearing our fire perimeters now, before new flame arrives. The sweaty work of resilience will make us stronger. My awareness of our fragility deepens my appreciation of this day.

How beautifully and deeply considered and stated. Resilence,  a word to keep in the forefront of my mind in these harsh times. Thank you Eric for sharing your important thoughts.